Your Agency is Transitioning to NIBRS: How Do You Let the Community Know?

Your Agency is Transitioning to NIBRS: How Do You Let the Community Know?

As of January 1, 2021, the FBI officially retired the collection of crime data through the Uniform Crime Reporting (UCR) Program’s traditional Summary Reporting System (SRS). The FBI has encouraged a nationwide implementation of the National Incident-Based Reporting System (NIBRS) in each agency as it enhances the overall quality of crime data collected by law enforcement.

With this new style of data reporting, however, comes new communication challenges. Not only does NIBRS analyze more offenses than SRS, but it also captures more detailed crime data during a single incident, including information on relationship between victims and suspects; demographic details; property descriptions; suspected drug use; and more. Because NIBRS reports have become more detailed, some context is needed to illustrate the differences in the reports due to system changes rather than increased crime.

To meet this concern, the National Crime Statistics Exchange (NCS-X) partners have created technical assistance documents to equip agencies with the knowledge necessary to proactively communicate with the public regarding crime data.

Talking About NIBRS: Messaging About Crime Data to Stakeholders

Transparency is essential in today’s policing environment. Engaging community members and stakeholders regarding the benefits of the National Incident-Based Reporting System (NIBRS) can promote understanding and acceptance of this new method of reporting an agency’s crime statistics. NCS-X’s Talking About NIBRS: Messaging About Crime Data to Stakeholders provides best practices on how to effectively communicate an agency’s transition to reporting NIBRS crime data. 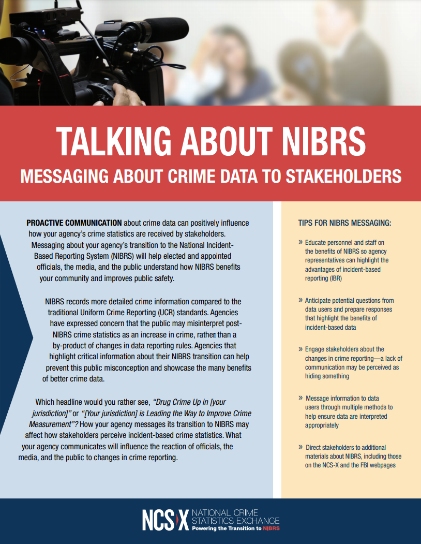 While the document identifies tips for NIBRS messaging, such as educating personnel and staff on the benefits of NIBRS and anticipating potential questions from data users, it also lays out important messages that answer how incident-based reporting is different from the UCR Program’s traditional Summary Reporting System. These messages will help stakeholders to better understand the many benefits of the switch to NIBRS. The document explains how NIBRS crime data provides meaningful insight for addressing public safety issues and can help to build positive relationships and trust with the community.

Curious about how to begin the communication process? Talking About NIBRS provides recommendations for the best ways for an agency to reach out and engage with the public using social media, press releases, city council meetings, and annual reports.

In the aforementioned technical assistance document, issuing a press release to announce an agency’s transition is identified as an important communication tool to help inform stakeholders of NIBRS crime data. 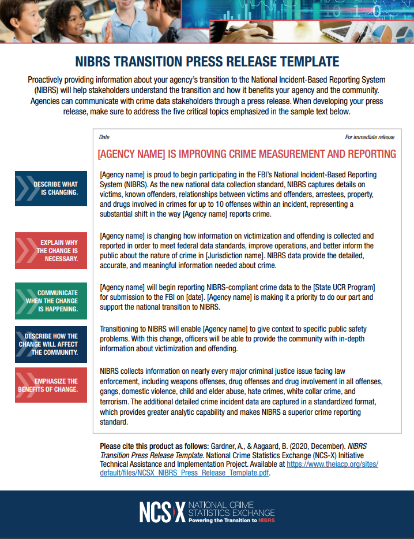 In its companion piece, NIBRS Transition Press Release Template, the NCS-X team has identified the five key components of writing a press release:

The document also provides sample text and formatting to illustrate these five elements in a developed press release.

While there has been a great push to transition each agency to NIBRS, there are still many throughout the country who have not made the switch. The FBI, BJS, and the NCS-X team has remained committed to assisting all agencies during their transition process.

A library of resources can be found on the FBI’s NIBRS webpage, as well as the NCS-X project page.

During these extraordinarily challenging times, the ability of police leaders, elected officials, and communities to prepare for, respond to, and successfully manage demonstrations and protests…
|
Blog Post

The annual IACP/T-Mobile 40 Under 40 Award recognizes 40 law enforcement professionals under the age of 40 from around the world who demonstrate leadership, exemplify…
|
Blog Post
Blog Post
SHARE