IACP/Motorola Solutions Trooper of the Year

IACP/Motorola Solutions Trooper of the Year

This award recognizes four state troopers and provincial police officers who have demonstrated bravery, courage, leadership, and professionalism in the previous year.

The IACP/Motorola Solutions Trooper of the Year Award recognizes four state troopers and provincial police officers who have demonstrated bravery, courage, leadership, and professionalism in the previous year. The men and women of state and provincial police agencies perform remarkable work keeping the citizens of their jurisdictions safe. The IACP and Motorola Solutions partner each year to highlight the incredible actions of law enforcement's finest front line officers.

At the IACP annual Division Midyear meeting, four regional finalists are honored and one finalist is announced as the overall IACP/Motorola Solutions Trooper of the Year. Finalists are selected by members of the State and Provincial Police Division.

From the Award Sponsor - Motorola Solutions
“Motorola Solutions is proud to partner with the International Association of Chiefs of Police to honor the selfless work being done in police agencies every day around the world. Men and women in state and provincial police agencies know the situations they face can change in an instant, yet they continue to put their lives on the line to help keep their communities safe. Motorola Solutions humbly recognizes the brave efforts of our four finalists and the sacrifices made by all law enforcement.”

The following nominations will be accepted for this award:

2020 Trooper of the Year Award Program

On December 1, 2019, a dispatch call went out regarding a home invasion in which one of the residents had been taken hostage by the intruder. Trooper Mark Fletcher, with the Michigan State Police Paw Paw Post, drove to the scene to provide backup to the responding deputies and officers. The officers determined the home was occupied by an adult male and female and their daughter. While the two females were able to flee to an upstairs room, the male occupant was taken hostage by the armed intruder in a downstairs bedroom. As Trooper Fletcher and his colleagues planned a course of action, they heard a gunshot from inside the home, causing them to immediately make entry into the home in an attempt to rescue the hostages.

Once inside, they were able to contain the suspect and male hostage in the downstairs bedroom, establish direct communications with the suspect, determine that the male hostage was unharmed, and safely extract the two female hostages. The suspect continued to fire multiple rounds intermittently during negotiations. Some of the rounds were fired through the floor and walls into adjacent rooms striking three of the responding officers, including Trooper Fletcher. After the injured officers were assisted out of the residence, Trooper Fletcher immediately rendered first aid to one of the officers by applying pressure to the gunshot wound. Trooper Fletcher then realized he had also been shot below the knee; at which time he utilized his tourniquet on his own leg. Trooper Fletcher continued administering first aid to one of the injured officers as he and the other two officers were transported to the hospital.

The suspect ultimately broke a window and exited the residence where officers on the perimeter arrested him. It was later determined that the suspect killed the male hostage prior to exiting the window.

Trooper Fletcher’s selfless and timely actions helped to contain a violent suspect, rescue hostages, and provide immediate care to his fellow officers while placing himself in imminent physical danger.

On September 8, 2020, dispatch notified Trooper Horlkins Saget that Trooper Megan Stiles was in an active pursuit on I-95 just north of Atlantic Avenue in Palm Beach County, Florida. Being in the area, Trooper Saget joined the pursuit. The suspect vehicle made an abrupt exit from I-95 onto Atlantic Avenue, and at an intersection, it crashed into another vehicle. The suspect drove approximately one-half mile before abandoning the heavily damaged vehicle and fled on foot into a nearby neighborhood while carrying a military-style rifle and a semi-automatic handgun. As Trooper Saget and Trooper Stiles continued the pursuit, the suspect turned and discharged his rifle at them. The suspect then continued to flee on foot between houses. By this time, Troopers Saget and Stiles had exited their vehicles and began pursuing the suspect on foot. The suspect ran between two houses, stopped, and waited to ambush the pursuing troopers. Maintaining their situational awareness, Troopers Saget and Stiles slowed their pace as they passed between the houses. As Trooper Saget turned the corner he encountered the suspect who immediately fired his handgun, missing Trooper Saget. Trooper Saget returned fire, striking the suspect, and ending the attack.

Trooper Saget then retrieved first aid equipment and returned to assist Trooper Stiles who was performing CPR. The suspect succumbed to his injuries. This incident occurred during the first two months that Troopers Saget and Stiles had been cleared for solo patrol and their teamwork is credit to their training and professionalism. The immediate action of Trooper Saget confronting and neutralizing the threat of the suspect while under fire demonstrates his selfless service to the community and the Florida Highway Patrol.

On Saturday, April 25, 2020, a violent home invasion occurred at the Harding Woods Trailer Park in Pittsgrove Township, New Jersey. During the incident, five suspects forced entry into a residence where they assaulted a female victim by kicking, punching, and striking her with objects, causing severe injuries. After the assault, the suspects stole the victim's cell phone and departed the scene. Detective Richard Hershey, from the Troop "A" Criminal Investigation Office, responded to the Harding Woods Trailer Park to investigate the crime. After processing the scene, Detective Hershey responded to Inspira Medical Center to interview the victim, who provided the names of her assailants. As he was conducting the interview, several of the victim's family members were engaged in a series of retaliatory attacks in Bridgeton City against those they believed were involved in the assault. Detective Hershey returned to the trailer park to conduct witness interviews. As he was speaking to the witnesses, a caravan of 5 vehicles carrying 15 occupants returned to exact revenge against the victim's family members. Several armed individuals exited the vehicles and confronted Detective Hershey. Despite identifying himself as a New Jersey State Trooper, the suspects continued to advance towards him. At that point, he drew his weapon to defend himself and the witnesses. Three suspects fired from a vehicle at Detective Hershey, striking him in his abdomen. Despite being critically wounded, he was able to strike the fleeing vehicle with his handgun to leave a distinguishing mark to assist with later identifying the vehicle. Unable to walk and bleeding profusely, Detective Hershey crawled to cover and calmly called 911 to request assistance and emergency services. During the exchange of gunfire, the suspects fired 13 rounds at Detective Hershey, with many of the bullets striking nearby residences that were occupied at the time.

Three men were ultimately charged in the shooting of Detective Hershey, while 18 have been charged overall in connection with the investigation, which included the home invasion.

Detective Hershey demonstrated ultimate dedication and commitment to protecting the lives of others while placing himself in danger. His actions prevented injury and loss of life to others and are the embodiment of the New Jersey State Police core values: honor, duty, and fidelity.

On July 11, 2020, the Colorado State Patrol Denver Communications Center received multiple REDDI (Report Every Dangerous/Drunk Driver Immediately) reports concerning a Jeep traveling on Interstate 25. Trooper Lance Curry, in addition to Trooper Victor Sargenti and Trooper Michael Carlton, responded and attempted to locate the vehicle. Dispatch reported the vehicle was stolen and was involved in a felony menacing with a firearm an hour prior. The three troopers located the Jeep and developed a plan to stop the vehicle and apprehend the driver. Trooper Curry created a roadblock to stop oncoming traffic, and Trooper Sargenti and Trooper Carlton initiated a traffic stop. The suspect began making evasive maneuvers. With all three troopers in pursuit, the suspect fled until he was met by Trooper Acuna from Colorado Springs, at which point the suspect crashed the car. The suspect exited the Jeep and circled around the back as Trooper Curry approached in his patrol car. The suspect brandished a 9mm handgun at Trooper Curry as he ran past the patrol car and then attempted to carjack a stopped vehicle.

As Trooper Curry responded to intervene, the suspect again pointed his weapon at the trooper. In an attempt to end the threat to himself and the carjacking victim, Trooper Curry struck the suspect with his vehicle, knocking the suspect down an embankment. The suspect then ran on foot across a large field into a neighborhood, where he entered the backyard of a residence where 10 people, including small children were located. The family fled inside the house as the suspect jumped the fence and began to try to enter the home. Meanwhile Trooper Curry continued his pursuit of the suspect and went to the front of the home. He quickly evacuated the people from the house and then went inside. Trooper Curry was joined by Troopers Carlton and Sargenti and officers from the Palmer Lake Police Department the El Paso County Sheriff’s Office who all remained outside giving commands for the suspect to drop his gun. The suspect climbed the stairs of the back deck and again tried to enter the home. The suspect then fired a shot through a dining window, broke the glass, and entered the home through a window. Trooper Curry, who was inside the home and one of the supporting officers outside the home engaged the suspect, striking him with several rounds to end the threat, and immediately administered aid. The suspect succumbed to his injuries.

Trooper Curry’s actions throughout the incident were instrumental in confronting and controlling the imminent threat posed by the suspect to the community and responding officers. By maintaining his bearing, timely threat assessment, and decisive action exemplify the highest levels of courage and professionalism. 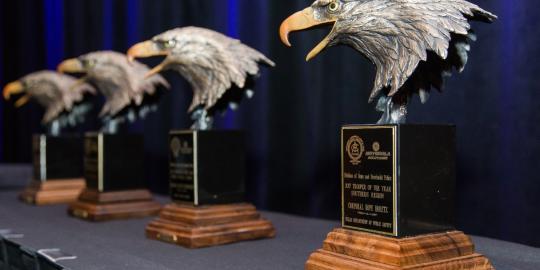 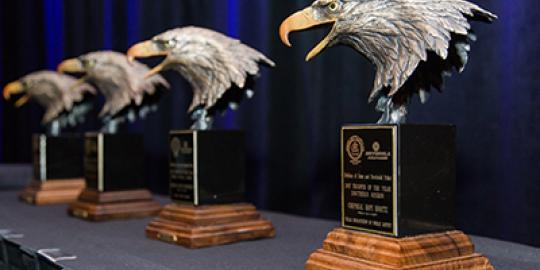