Intelligence-Led Community Policing, Community Prosecution, and Community Partnerships (IL3CP) is a unique approach to community policing that extends community partnerships to include prosecutorial and community service organizations along with law enforcement. This new model connects the criminal justice system and the community through seamless communication and partnerships. 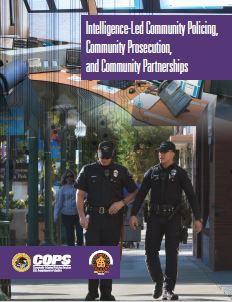 The IACP obtained grant funding from the Office of Community Oriented Policing Services (COPS), U.S. Department of Justice, to replicate and evaluate the IL3CP model in three pilot cities: Mesa, Arizona; Newport News, Virginia; and Saint Paul, Minnesota. Information obtained from the pilot cities was analyzed and developed into a report that illustrates the IL3CP model. The report can be used to guide communities through the process of implementing a successful IL3CP model.

Participants from the three pilot cities received training in the IL3CP concept from the Rockland County, New York, District Attorney’s Office (RCDAO) at the start of the project and received additional training as needed throughout the project. Community surveys were also conducted in each of the cities at both the start and conclusion of the project. The primary objective of the survey was to determine community perceptions of crime in the communities where the IL3CP project is implemented. IACP staff and representatives from the RCDAO also conducted site visits to each pilot city to monitor project developments, provide technical resources and assistance, as well as document adjustments, hurdles faced, and lessons learned throughout the project implementation.

The foundation for IL3CP is built on the established organizational structure of the Rockland County, New York, District Attorney’s Office (RCDAO) which has tied together the concepts of intelligence led policing, community policing, community prosecution, and community partnerships. The RCDAO focuses on the collection, evaluation, and analysis of information that can identify criminal activity. This intelligence information is used by local, state and federal law enforcement agencies throughout the New York metropolitan area, the state of New York, and in some cases, across the country, to develop plans to prevent/reduce criminal activity.

In addition to vigorous prosecution, ADAs utilize less traditional, problem-solving solutions such as mediation or civil action to resolve cases in a more efficient and expedient manner. Through traditional community policing efforts of local police departments, partnerships are established with citizen groups, non-profit organizations, other government agencies and private companies that have a common interest in reducing crime and community problems. These partnerships connect the community with the entire criminal justice system to establish a collaborative approach and unified response to crime and community problems.

IL3CP has fostered significant across-the-board reductions in serious crime, dramatic in several offense classes, since its inception in 2008. Notably, the initial implementation of IL3CP did not require any additional staff or funding for the RCDAO or local law enforcement agencies in Rockland County.

March 13, 2013 Maricopa County Attorney Bill Montgomery announces realignment of criminal trial division attorneys based on the success of the IL3CP project in Mesa

The project area is an area which combines a community known as Marshall Courts and a privately owned apartment complex known as Seven Oaks Apartment. Both areas are divided by a roadway, and as a result share a lot of the same concerns. Marshall Courts is a public housing complex comprised of 389 townhome style residences. The complex is managed by the Newport News Redevelopment and Housing Authority with funding provided by the U.S Department of Housing and Urban Development, Office of Housing Choice Voucher Program. At the onset of this project, 349 rental units were occupied and 40 units were under renovation. Approximately 934 persons reside within the Marshall Courts community. Seven Oaks Apartments consists of one- and two-bedroom units that are privately owned. Crimes associated with drug distribution, robbery, assaults, and property crimes are the most common incidents in Marshall Courts. Quality of life crimes including loitering, littering, and disorderly conduct are also common in the community.

The project area is a combination of six connected police grids in the Eastern Police District and is comprised of approximately 3,200 residences. Approximately 16,533 persons reside within the project area. The neighborhood is very diverse, with Hispanic, Hmong, and Somali ethnic groups comprising the majority of the population. The project area has had historically high rates of crime associated with violence, motor vehicle thefts, and quality of life crimes.

Eastside Review, January 29, 2012. SPPD to Payne-Phalen: How are we doing?http://www.eastsidereviewnews.com/content/sppd-payne-phalen-how-are-we-doing-0#.UsbdgWYo5aR