Sponsored Content: Brookhaven Police Department: The Power of Community at the Speed of Drone Flight

Sponsored Content: Brookhaven Police Department: The Power of Community at the Speed of Drone Flight 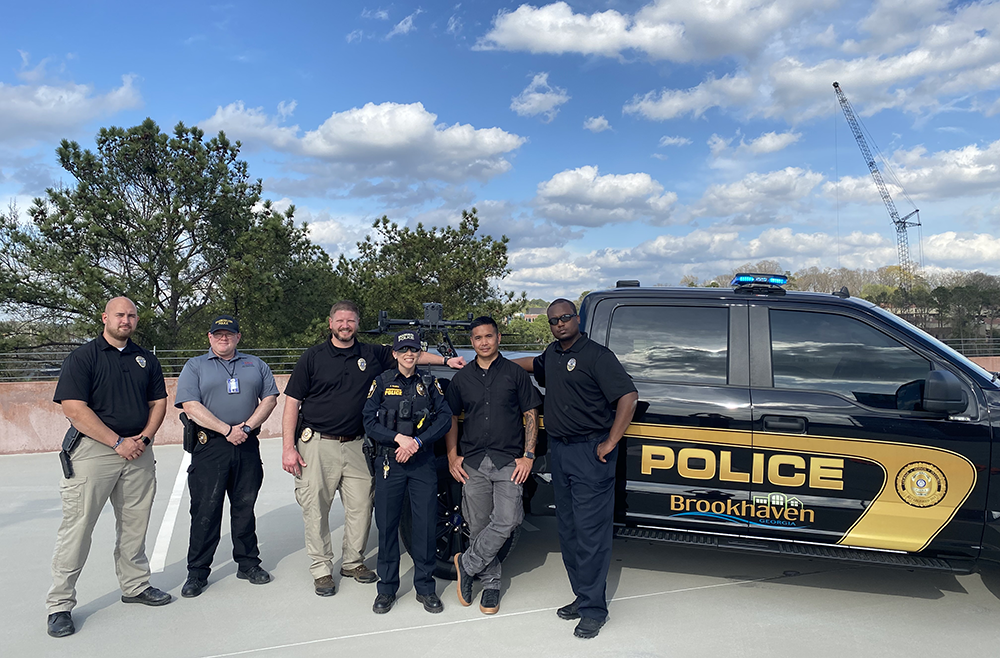 Brookhaven, Georgia, is a beautiful city located in the northeastern Atlanta suburbs with approximately 55,000 residents. The community boasts a diverse population and is home to residential neighborhoods and several large corporations.

Serving the city, the Brookhaven Police Department and its 85 sworn officers are committed to providing exceptional service and building positive community relationships. When the department initiates new programs, they first introduce them to the community, gather feedback and work together to accomplish shared goals.

Solving a Need for Additional Resources

Lt. Abrem Ayana leads Brookhaven PD’s Investigative Unit. During the height of the pandemic, he says, it became harder to attract qualified candidates into the policing profession. At the same time, the department was doing its best to reduce unnecessary up-close interactions to protect residents and officers from COVID-19. Lt. Ayana started considering new ways to extend resources and increase their reach quickly.

Lt. Ayana says the department would get calls about suspicious activity. However, available officers can’t always get to the location fast enough to locate a suspect. When a patrol car arrives, evidence of illicit activity could be long gone. In some situations, they might request a helicopter from the county, but it is expensive to operate and could take an hour or more to arrive on scene.

Lt. Ayana recalls an incident where an officer responded to a report of a stolen car in progress.  A passerby flagged down the officer and said two suspects were attempting to steal a car from a car rental agency. The officer caught one of the suspects and the other fled into a park, and was not apprehended.

“We don’t have hundreds of officers to scour a large area,” says Lt. Ayana. “And, at any given time, our officers are responding to multiple calls for police service.”

He called for the county helicopter, but it was unavailable. By the time they had access to another helicopter, it was too late.

“The suspect got away,” Lt. Ayana explained. “It could have turned out differently if we’d had someone in the air quicker.”

That’s when he went to Brookhaven PD’s Chief of Police, Gary Yandura, and asked about the possibility of incorporating drones into their emergency response.

Suppose the department could get eyes on a scene quickly. In that case, they could let officers on the ground know what to expect before arriving or direct them to where suspects are in real time, not where they were when the call was received. They could also determine that there is no problem and clear the call, for instance, when a suspicious van turns out to be a cable repair person doing their job.

Drone as a First Responder

Chief Yandura is forward thinking and embraces technology. He gave Lt. Ayana the go ahead to look into what it would take to launch a drone program for their department.

Right away, Brookhaven faced a seemingly insurmountable challenge. With at least four airports in the area, including Hartsfield–Jackson Atlanta International Airport, the nation’s busiest, they figured there was seemingly no way the Federal Aviation Administration (FAA) would let them fly drones.

Lt. Ayana saw a video of the police drone program in Chula Vista, California, close to the San Diego International Airport. He wanted to know how the program was working for them and specifically how they handled the matter of flying drones in the vicinity of plane traffic. He started talking with them and conducting research.

A few years earlier, Chula Vista Police Department helped pioneer a new concept in emergency first response and public safety called Drone as a First Responder (DFR). Rather than wait and launch a drone after an officer arrived on scene, which many departments have started doing, they were using drones to respond to emergency calls proactively. Drones launch as soon as a call comes in; at the same time, officers are dispatched.

The department’s program was chosen to take part in the FAA’s Unmanned Aerial Systems Integration Pilot Program (IPP), the only municipal program of the 10 selected. The FAA wanted to see how such operations could be conducted without impacting other aircraft and citizen safety.

Lt. Ayana and the Brookhaven PD moved forward to create a similar program and improve response times, avoid unnecessary officer diversions and better prepare for incidents. Plus, they saw an opportunity for more positive community interactions, an important goal for a department that prioritizes community relations.

“We were also looking at ways to improve interactions between citizens and law enforcement,” Lt. Ayana says.  “Better informed officers make better decisions. The more information an officer has walking into an uncertain situation, the greater opportunity for them to develop a plan of action.”

Getting the Program off the Ground: DFR Certification and Flight Operations

On October 27, 2020, Brookhaven PD went before their City Council and received approval for the program. They would be the first agency east of the Mississippi with a DFR program modeled after Chula Vista PD.

Choosing the right vendor and drone flight control software was key to Brookhaven PD getting their drone program off the ground and earning FAA certification for DFR operations.

“It was important to choose a vendor with experience in this space since we had so many obstacles against us,” Lt. Ayana explains. “That’s why we chose CAPE from Motorola Solutions. We knew Chula Vista was using the software and relied on its features for DFR success.”

One of those features is obstacle avoidance, which serves as an added safety assist to the pilot. Another is the software’s ability to limit the altitude at which the drone will fly, a critical consideration for the FAA, given the nearby airports and controlled airspace. Geofencing capabilities within CAPE also lock out other obstacles, such as power lines and towers, so a pilot won’t accidentally fly into them.

“It’s a simple analogy for a smart solution, but geofencing and pre-plotting obstacles is like bowling with the bumpers up,” says Lt. Ayana. “We don’t have to worry about our ball getting in the gutter. We’re guaranteed to hit the pins without negative consequences.”

For Brookhaven PD’s DFR program to succeed, especially after building positive and trusting relationships with the community, Lt. Ayana and the department knew they’d have to assure residents of privacy, safety and transparency.
First, the department reached out to community and national groups, including the American Civil Liberties Union (ACLU). They collected invaluable suggestions to protect privacy, which Brookhaven then implemented, including purging video after a set period.

“The footage is kept for 30 days and then destroyed unless it becomes evidence in an investigation,” explains Lt. Ayana. “In that case, it follows the retention and privacy standards of all other evidence.”

Second, the department engaged with the local District Attorney’s office to ensure the DA was comfortable with this new way of capturing evidence. The agency hosted a review meeting and shared the policy supporting the drone program and the DA’s office reviewed it. “It was important for us to work closely with our DA to be sure they understood that the evidence we are capturing is legal and ethical and can be used in court,” Lt. Ayana shared.

The department also maintains a CAPE Flight History page on their public-facing website so residents can see precisely where drones have been deployed and why.

“One of the things I’m most proud about is there hasn’t been one complaint about the program,” says Lt. Ayana. “That’s because we’re transparent about what we’re doing and why.”

Today, two people operate Brookhaven PD’s drones, one does the flying, and the other, the teleoperator, takes control of the video from a computer inside the station and relays important details to officers on scene.

When a 911 call or a traffic stop occurs, they can quickly assess whether a drone would be of assistance. If so, the pilot can immediately launch one while dispatch simultaneously sends officers to the scene on the ground. The drone typically gets there first.

The drone operators may then quickly assess the scene and determine if officers are needed, saving units on the ground from a diversion while saving the department essential resources.

“Instead of driving 15 minutes only to be told to leave, they can return to their beats and save time and money,” says Lt. Ayana. “Plus, they’ve just avoided an unnecessary encounter with a citizen, which could have escalated.”

At times, the drone may confirm illicit activity, allowing an officer to make a stop with probable cause and better preparing the officer for a less contentious interaction.

Drone operators can share live video with officers via their smartphones or in-car computers, allowing them to assess the situation and track where the suspect is headed in cases of pursuit. The drone can assist in the pursuit or search, as well. For instance, searching for a suspect in a cruiser is constrained by roads, stop signs, and traffic. A drone can easily fly across blocks and over wooded areas and fields in pursuit of a suspect.

Recently, such a case made headlines in Brookhaven. A vehicle allegedly tied to an armed robbery in Charlotte, North Carolina, was detected via license plate recognition software.  The ground officer spotted the car at a local store and approached a male standing near it. At the same time, the officer provided the drone pilot a description of a second suspect he observed running to the back of the store, and moments later, the drone pilot observed him fleeing the store. As he ran through woods and a neighborhood, the drone pursued, giving aerial eyes to the officers at all times, including a K-9 unit on the ground.

The K-9 officer told Lt. Ayana it was his shortest pursuit ever because of the drone assist.

“It’s a highly populated, dense area, and given our resources, I can’t say we would have caught the suspect,” Lt. Ayana says. “Officers have lots of heavy gear, are trying to jump fences, and keep eyes on the suspect. With the drone, the officers on the ground could see exactly where the suspect was headed, rather than having to guess and search a wide area.”

A key to the program’s success is being able to launch a drone within seconds. That doesn’t happen with helicopters and, in most environments, doesn’t happen with drones either. Yet, with Brookhaven’s determination and safety measures assured by CAPE, the FAA has confidence that there’s no impact on commercial or private aircraft.

In response, the FAA approved Brookhaven PD, as it did with Chula Vista PD before it, to fly drones “beyond visual line of sight.” It also allows department drone operators — all of whom must first earn FAA licensure — to launch drones remotely.

Brookhaven PD’s DFR program has been a critical success in terms of public safety and public engagement. Since Brookhaven PD launched its first successful flight in April 2021, residents have come to trust the program and understand that the first “officer” on a scene may be remotely viewing video from a drone.

“Today, when officers demonstrate the drones at local air shows and community events, the first question they get is whether their neighborhood is covered by drones,” says Lt. Ayana. “The second question is: if not, can it be?”

Chris Bennett, Director of Product Management, Motorola Solutions
Chris Bennett founded Callyo and now works on product strategy for Motorola Solutions. Chris is a graduate of both Harvard University’s Technology & Innovation Program and The Wharton School of Business and holds over 60 software patents.