“Motorola Solutions is proud to partner with the International Association of Chiefs of Police to honor the selfless work being done in police agencies every day around the world,” said Jim Mears, senior vice president, North America Market, Motorola Solutions. “Men and women in state and provincial police agencies know the situations they face can change in an instant, yet they continue to put their lives on the line to help keep their communities safe. Motorola Solutions humbly recognizes the brave efforts of our four finalists and the sacrifices made by all law enforcement.”

There were many submissions detailing the courageous, dedicated acts of troopers in state and provincial agencies that exemplify what it means to serve and protect their communities.  This year’s regional finalists are:

On the morning of October 16, 2019, Trooper Ruben Correa was conducting a traffic stop when he heard of a vehicle that had left the interstate and became lodged on the railroad tracks – which are frequently used for passenger trains traveling upwards of 80 mph. Trooper Correa immediately left his traffic stop and traveled to the approximate location of the vehicle. He stopped his patrol car where the chain link fence was knocked over and observed the vehicle parked in a precarious position on the tracks. Trooper Correa ran over the downed fence and up the embankment towards the vehicle. Unbeknownst to him, as he initially approached, there was a train about a mile away heading in their direction. Trooper Correa made contact with the driver of the disabled vehicle, who remained unresponsive. Trooper Correa vigorously shook the driver in an attempt to wake them up and tried to unbuckle the seatbelt. As he was doing so, Trooper Correa noticed out of the corner of his eye the large headlight and could hear the train horn blaring as it rapidly approached their location. The driver of the vehicle had somewhat regained consciousness and became combative with Trooper Correa. His attempts to coax the driver out of the vehicle were unsuccessful. Trooper Correa bear-hugged and pulled the driver to safety just before the train struck the vehicle, crushing it. It was later determined that the driver had suffered a medical emergency while driving, causing his vehicle to become stuck on the railroad tracks.

Trooper Correa’s calm demeanor and immediate action enabled him to rescue a disoriented motorist from what would have been a fatal train collision. Watch the video. 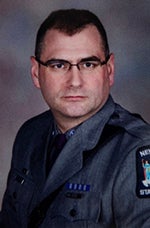 Trooper Conklin’s calm demeanor and decisive response to an imminent threat on his life saved him and prevented a violent suspect from harming others. Watch the video.

Trooper Seger utilized his training and put his own life at risk in order to protect the public from an extremely dangerous and potentially deadly individual. Watch the video.

"IACP is proud to honor those law enforcement officers who go above and beyond to serve their communities, putting their lives at risk each day,” said IACP President Steven R. Casstevens. “Congratulations to our finalists Trooper Conklin, Trooper Correa, Trooper Harrell, and Trooper Seger for their heroic actions and dedication to public safety. We appreciate the selfless courage, commitment, and professionalism displayed by all of the finalists. They are exceptional examples of the valor displayed by law enforcement officers across the globe. On behalf of the entire association, congratulations and thank you for your service."