Blog Post
The IACP Midsize Agencies Section members from Illinois held their annual Fall “working lunch” meeting on August 19th at the Tinley Park Convention Center outside Chicago.  The lunch is held in conjunction with the Midwest Security & Police Expo each year. 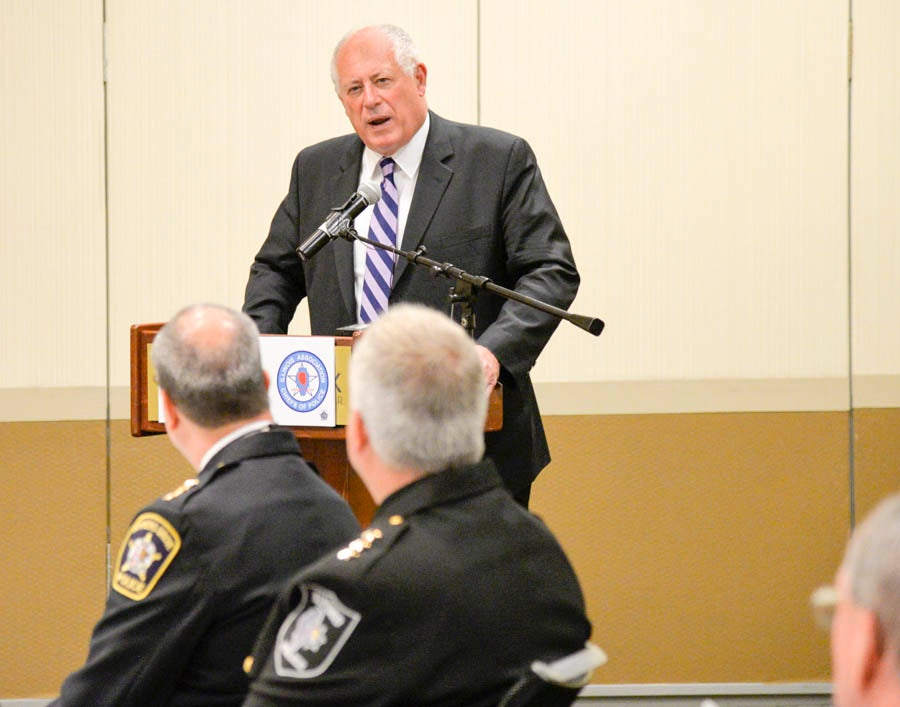 Illinois Governor Pat Quinn was the keynote speaker, and Chief Steve Neubauer of the Tinley Park Police Department served as host for the meeting that was underwritten by Motorola.  Governor Quinn spoke very frankly about funding challenges for the Illinois State Police and the importance of maintaining the number of troopers on the highways.  State police staffing has widespread support among midsize chiefs as municipal agencies would likely have to fill gaps to handle the workload if there were less troopers.  The Governor also spoke about legislation limiting access to high capacity firearm magazines designed to protect law enforcement and limit school shooting tragedies.

Later, there was a roundtable discussion on a variety of topics including a preview of the IACP Conference in Orlando and the Midsize Agencies meeting.  The group discussed the possible impact of the new Illinois Medical Marijuana law as it relates to pre-employment screening for both civilian & sworn employees.  The issue of 911 PSAP funding was also discussed, with the pressure to consolidate with smaller agencies being a concern in the coming years.

The Illinois Mids is an informal group of two dozen chiefs who serve approximately 1/5 of Illinois residents living outside the city of Chicago.  Members belong to both the IACP Midsize Agencies Section as well as the Illinois Association of Chiefs of Police (ILACP).  The group tries to meet twice a year, once in the Spring in the State Capitol of Springfield located in central Illinois and again in the Fall up North in the Chicago suburb of Tinley Park.  The "working lunches" are held in conjunction with gatherings of the ILACP to minimize travel and time away from the office.

Midsize departments confront a range of “big city” issues, but without the same resources to deal with them.  Gangs, drugs, serving diverse communities, staffing challenges, media relations and shrinking budgets are frequent items brought up during the roundtable discussions.  While the purpose of the gatherings is to discuss mutual issues and to exchange new strategies—the Illinois Mids also use the lunch meetings to network and build relationships that prove beneficial throughout the year.

Mark your calendars – The Midsize Agencies Section meeting during the 2014 IACP Annual Conference will be Saturday, October 25th at 1pm in room W304CD.
Blog Post
SHARE