If I Were Not Wearing My Vest, I Would Have Died: The 2022 IACP/DuPont Kevlar Survivors' Club Honoree

If I Were Not Wearing My Vest, I Would Have Died: The 2022 IACP/DuPont Kevlar Survivors' Club Honoree

On October 7, 2021, Deputy Tyler Post, of the Grundy County (Illinois) Sheriff's Office, attempted a traffic stop for speeding and unsafe passing. The offending vehicle fled from the stop, resulting in a crash between Deputy Post's cruiser and the suspect's vehicle. The suspect ran, and Deputy Post pursued. Just as the deputy reached to grab him, the offender, armed with a 9mm Glock pistol, turned and opened fire, striking Deputy Post in the left forearm, chest, and shoulder. The ballistic vest trapped both bullets to the torso. 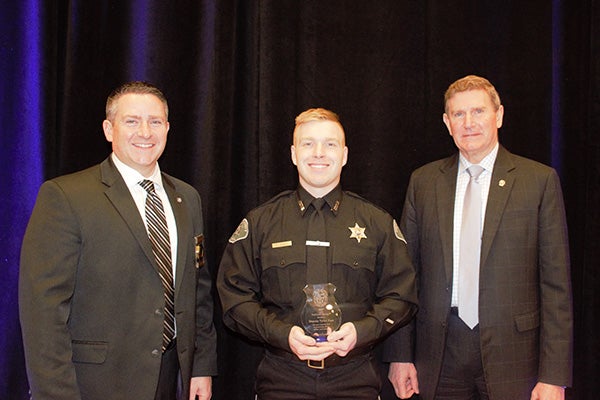 Deputy Post provided a description of the suspect and direction of travel, applied a tourniquet to his arm, and continued pursuit. A fellow responder took the suspect into custody a short time later without further incident. As a result of proper vest wear, the two shots to his torso were reduced to non-life-threatening injuries.

"I have an eight-month-old son," Deputy Post explained. "So he would have been living his whole life without his dad if I weren't wearing that vest."

The IACP/DuPont™ Kevlar® Survivors' Club® recognizes local heroes for not only their courage but also for their conscious decision to protect themselves from danger by using personal body armor. The Survivors' Club is pleased to announce Deputy Tyler Post as its 2022 honoree. IACP Fifth Vice-President Doug Shoemaker and DuPont Defense Program Manager Eoin Lynch presented the award to Deputy Post at the OSW Symposium on March 17, 2022, in Atlanta, Georgia. Presenting the award at this annual event helped to magnify the impact of this important message to an audience of law enforcement officers, police psychologists, and wellness personnel.

"If you have a family at home, you owe it to them. It's a simple enough answer, and it should be enough to make you put that body armor on. If I were not wearing mine, I would have died."

Since 1987, IACP has partnered with DuPont to honor those police officers who have survived life-threatening incidents because they were wearing their personal body armor. The Survivors' Club award helps reinforce the use of body armor every day and every shift for officer safety. It also serves as a reminder of the heroic efforts police exhibit while serving their communities.

Sponsored Content: 5G technology and Public Safety - What you need to know

Wireless connectivity facilitates fast, effective communication and 5G is now available in many areas of the country. Few technologies have received as much attention as…
Dale Stockton
| |
Blog Post