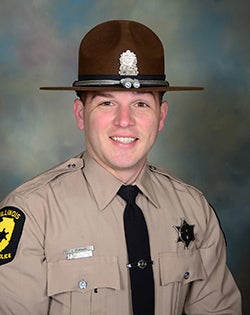 Alexandria, VA – On October 23, 2020, the International Association of Chiefs of Police (IACP) and Target named Trooper Jeffery Graham from the Illinois State Police as the IACP/Target 2020 Police Officer of the Year. Trooper Graham was chosen from four finalists for this honor.

On February 12th, 2019, a 33-year-old woman and her 10-year-old daughter were kidnapped in Missouri. A chase broke out, and the pursuit eventually crossed state lines where Illinois State Police assumed responsibility. Illinois State Police then slowed the offending vehicle with spike strips allowing the hostages to escape. The suspect continued to flee and attempted to switch vehicles by carjacking another victim. Although unsuccessful in acquiring a new vehicle the suspect fatally shot the car owner in the process. Illinois State Police Trooper Jeffery Graham caught up to the pursuit while it was in action. Eventually ending up at a dead-end in a residential neighborhood, Trooper Graham pursued on foot. Although confronted with gunfire from the kidnapper, Trooper Graham was able to draw on his tactical skills to neutralize the threat.

Trooper Graham’s bravery and ability to react quickly in high-pressure situations, in not one but two large scale events within six months, reaffirms his commitment to service and helping save the lives of those around him.

“Congratulations to our 2020 Police Officer of the Year Trooper Jeffery Graham with the Illinois State Police. The IACP is proud to honor your courage, professionalism, and dedication to your community. We appreciate your continued commitment to public service. All four finalists are exceptional examples of the heroism displayed by law enforcement officers across the globe. On behalf of the entire association, congratulations and thank you for your public service,” said IACP President Steven R. Casstevens.