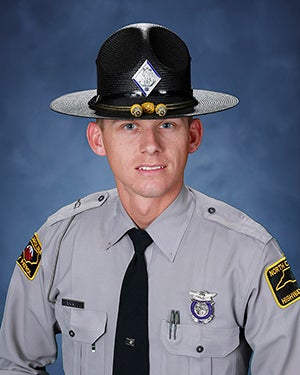 On October 14, 2020, the International Association of Chiefs of Police (IACP) and Motorola Solutions named Trooper Daniel Harrell from the North Carolina State Highway Patrol as the IACP/Motorola Solutions 2019 Trooper of the Year. Trooper Harrell was chosen from four finalists among state and provincial agencies of the United States and Canada for this honor.

“Motorola Solutions is proud to join the IACP to recognize Trooper Daniel Harrell with the Trooper of the Year Award,” said Jim Mears, Senior vice president, North America Sales for Motorola Solutions. “Trooper Harrell has gone above and beyond to help keep his community safe. We humbly recognize Trooper Harrell’s brave efforts, and the selfless dedication of the men and women in police agencies around the world who help protect us every day.”

“Congratulations to our 2019 Trooper of the Year Trooper Daniel Harrell. IACP is proud to honor your courage, professionalism, and dedication to your community. We appreciate your continued commitment to public service. All four finalists are exceptional examples of the heroism displayed by law enforcement officers across the globe. On behalf of the entire association, congratulations and thank you for your service,” said IACP President Steven R. Casstevens.