On March 22, 2019, the International Association of Chiefs of Police (IACP) and Motorola Solutions named Corporal Joshua Moer from the Texas Department of Public Safety as the IACP/Motorola Solutions 2018 Trooper of the Year. Corporal Moer was chosen from four finalists among state and provincial agencies of the United States and Canada for this honor.

“Motorola Solutions is proud to join the IACP to recognize Corporal Joshua Moer with the Trooper of the Year Award,” said Jim Mears, senior vice president, North America Sales for Motorola Solutions. “Corporal Moer has gone above and beyond to help keep his community safe. We humbly recognize Corporal Moer’s brave efforts, and the selfless dedication of the men and women in police agencies around the world who help protect us every day.”

On April 26, 2018, suspect Anthony Lamar Carter kidnapped Kaylea Renee Butts in Norman, Oklahoma. A 911 call and a description of the vehicle had local law enforcement on high alert. The suspect was stopped in Oklahoma, but quickly sped away prompting a multijurisdictional pursuit. When Carter crossed the border into Texas, the Highway Patrol stepped in to assist with the high-speed chase. The pursuit involving several law enforcement agencies ensued for approximately 35 miles, reaching speeds of up to 150 MPH. Near the conclusion of the pursuit, Corporal Joshua Moer of the Texas Highway Patrol was the lead unit. As the suspect’s vehicle came to a stop after officers spiked the vehicle’s tires, Ms. Butts exited the vehicle in an attempt to escape. The suspect immediately exited the vehicle, chased and tackled Ms. Butts, and began violently stabbing her with a large knife. Recognizing that seconds mattered, Corporal Moer discharged his duty pistol at the suspect, brieﬂy delaying the attack. Trooper Aaron Clopton also arrived at the scene to assist. Corporal Moer and Trooper Clopton advanced toward the suspect, giving verbal commands for him to stop, however he refused to comply and continued stabbing. Both Corporal Moer and Trooper Clopton discharged their weapons ultimately ending the suspect’s attack. Corporal Moer had discharged his duty pistol 11 times, striking the suspect with each round. After determining the suspect was no longer a threat, Corporal Moer ran over to Ms. Butts and started providing ﬁrst aid to her while Trooper Clopton ran back to his patrol car to retrieve his ﬁrst aid kit and call for medical assistance. Corporal Moer, Trooper Clopton, and several other ﬁrst responders provided ﬁrst aid to Ms. Butts until EMS arrived and transported her to the hospital. Ms. Butts had 13 stab wounds and lost about ﬁve pints of blood. Due to the quick and decisive actions of Corporal Moer to stop the suspect’s assault on Ms. Butts and the immediate ﬁrst aid provided to her, Ms. Butts survived the aggravated assault. Corporal Moer displayed leadership and courageousness, which saved the life of Ms. Butts. 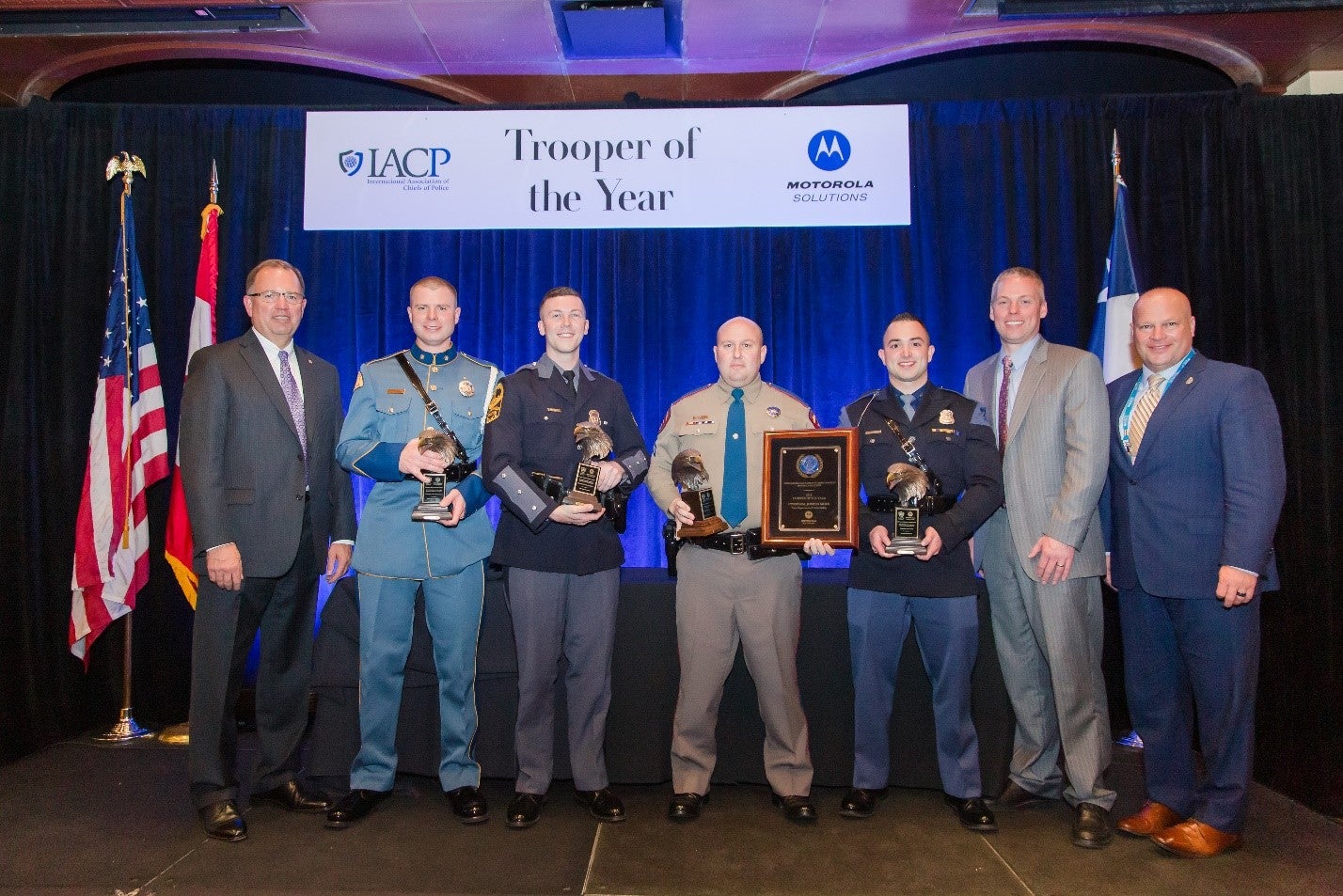 “Congratulations to our 2018 Trooper of the Year Corporal Joshua Moer. IACP is proud to honor your courage, professionalism, and dedication to your community. We appreciate your continued commitment to public service. All four finalists are exceptional examples of the heroism displayed by law enforcement officers across the globe. On behalf of the entire association, congratulations and thank you for your public service,” said IACP President Paul M. Cell.