IACP Leadership in the Prevention of Vehicle Crimes Award

IACP Leadership in the Prevention of Vehicle Crimes Award

The IACP Leadership in the Prevention of Vehicle Crimes Award, was created for law enforcement agencies, task forces, councils, community partnerships, and other theft prevention alliances worldwide to showcase the results of their Calendar Year 2020 theft prevention and/or enforcement programs. Agencies―both large and small―have an equal chance of winning; entries are evaluated on initiative, on use of available resources, and on overall results. Allowing agencies to share how they successfully curbed vehicle theft in their jurisdiction. 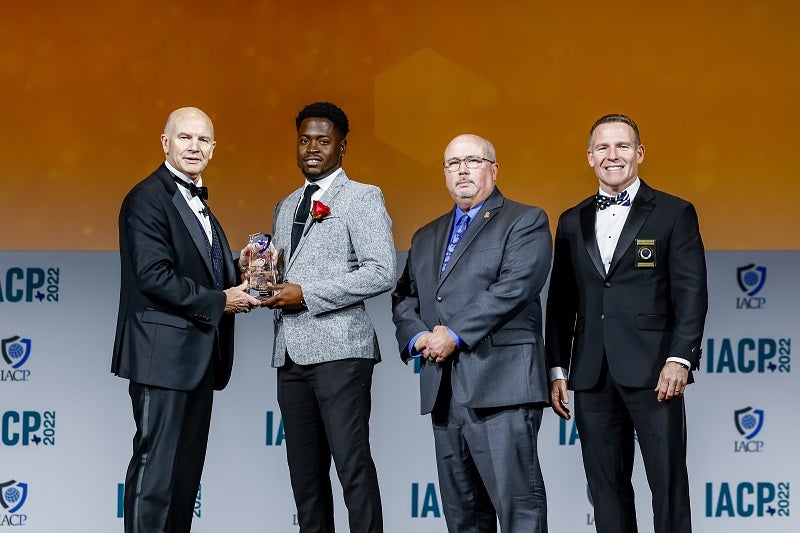 Ajman Police General Headquarters (GHQ), one of the Ministry of Interior's GHQs in the United Arab Emirates, has achieved outstanding accomplishments in safety and security through the prevention of serious crime, as well as crime in general. To prevent vehicle crimes, Ajman Police created a project to develop an operational control room to reduce crimes, called the Crime Prevention Control Room. It is used for studying and analyzing internal and large data about vehicle crimes. In addition, a newly developed software program. called Security Guide, is used to identify hotspots where crime rates increase, in an attempt to launch programs for crime prevention prior to incidents taking place.

The East Texas Auto Theft Task Force (ETATTF) is comprised of five participating jurisdictions. The ETATTF has highly trained auto crime investigators who develop professional relationships with law enforcement agencies and officers through educating officers and investigators on stolen vehicle recognition and identification. During the previous fiscal year, ETATTF investigators conducted 8 Texas Commission on Law Enforcement (TCOLE) accredited courses for 295 students. The courses focus primarily on recognition of stolen vehicles and theft trends in the area and include practical exercises. In 2018, task force investigators investigated 671 vehicle crimes cases. These include cases such as the unauthorized use of a vehicle, title and registration frauds, insurance fraud, theft, arson, and organized crime. During the same period, task force investigators made 84 arrests and filed 81 criminal cases.

Coloradans Against Auto Theft(CAAT) is a statewide coalition of law enforcement agencies, insurance companies, and community partners dedicated to reducing auto theft through public awareness and prevention education. For nine years, CAAT has led the “Lockdown” campaign, aimed at reducing observable-risk behaviors among Colorado drivers. The campaign has two focal points: a summer campaign around National Auto Theft Prevention month in July and a winter campaign in January around “Puffer Week,” an initiative that reminds Coloradans not to leave their cars running while unattended. CAAT has been successful in shifting the tone and core messaging of the campaign to focus on the link between auto theft and other crimes, as well as the effect auto theft can have on a community; curbing vehicle theft; and demonstrating the importance of community collaboration.

The HEAT program launched an aggressive digital media campaign in 2016 that focused on auto theft prevention education. HEAT utilized its Facebook page, YouTube channel, and website to spread the message, “Take your keys or take your chances.” HEAT also purchased digital banner advertisements that were displayed on a variety of websites. The digital campaign peaked during July 2016 (also Auto Theft Awareness Month). HEATreward.com accumulated more than 2,300 visits that month. HEAT also released two videos during the campaign, and those have nearly 65,000 views as of October 2017.

HEAT maintains an extensive inventory of educational and promotional items that it distributes to local law enforcement and civic groups for purposes of spreading auto theft awareness. In response to the increasing issue of motorists leaving their vehicles unattended with the keys inside, HEAT added static-cling window stickers to its inventory. The window stickers display the message, “Take Your Keys or Take Your Chances” and more than 600 were given to local agencies, which distributed them to convenience stores and gas stations throughout Virginia. HEAT distributed thousands of promotional items and educational materials to at least 20 law enforcement agencies in 2016.

Besides to the two aforementioned HEAT videos that the program released as part of its 2016 digital media campaign, HEAT released a VIN etching video. The purpose of the video is to teach citizens about the VIN etching process so that they might consider attending a VIN etching event. HEAT provided free VIN etchings to more than 418 motorists at 25 events statewide. VIN-etching events are often held in conjunction with local police and sheriff’s departments. At these events, staff has the opportunity to not only provide a service to citizens, but they also have the chance to interact with citizens in a one-on-one setting, which allows for better education and building of trust.

In addition to VIN etchings, HEAT conducted a number of other activities including:

The Virginia State Police HEAT program continues to experience success in its outreach and prevention efforts. Since HEAT’s inception in 1992, auto thefts in Virginia have declined nearly 60 percent.