IACP Leadership in the Prevention of Terrorism Award

IACP Leadership in the Prevention of Terrorism Award

The IACP Leadership in the Prevention of Terrorism Award are given to agencies that have demonstrated overall success in averting, stopping, or countering terrorist activity.

The IACP Leadership in the Prevention of Terrorism Award recognizes agencies that have demonstrated overall success in averting, stopping, or countering terrorist activity. It is meant to highlight successful counterterrorism investigations and educate the law enforcement field on instances reflective of collaboration and communication best practices during terrorism investigations. 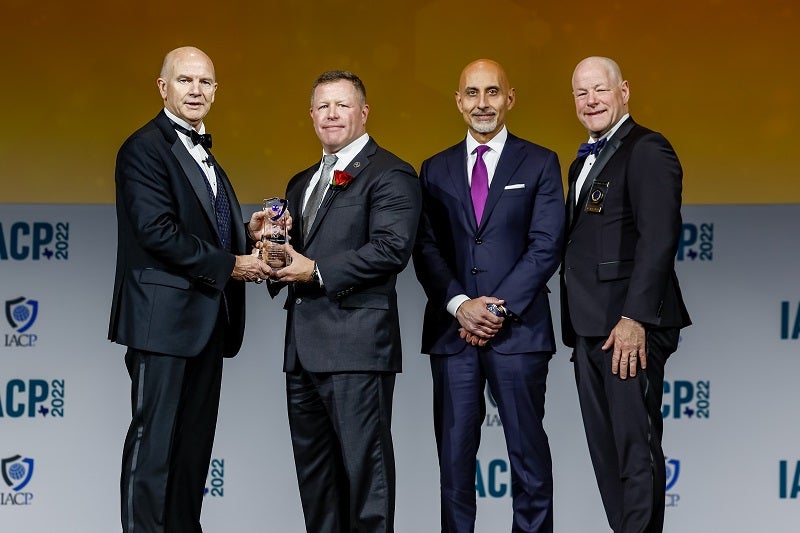 Operation Lights Out was a multi-division domestic terrorism investigation initiated in October of 2019. The investigation centered on a white racially motivated violent extremism plot to destroy power grids throughout the United States. The groups’ goal was to cause economic distress, create chaos, and racial division. During the investigation, the Federal Bureau of Investigation (FBI) developed a highly productive and well-placed Confidential Human Source (CHS). The case involved extensive coordination among the FBI, local, state law enforcement, several prosecutors’ offices, and the U.S. Attorney’s Office. The attack plot was fully disrupted through a coordinated operational takedown in August 2020 involving execution of federal warrants in Cincinnati, Indianapolis, and Milwaukee Field Offices. On February 23, 2022, each of the three subjects pleaded guilty to title 18 section 2339A Material support to Terrorism. Only the fourth Domestic Terrorism case has ever successfully charged under the statute.

In 2018, the New York Joint Terrorism Task Force (JTTF) conducted an investigation of package bombs addressed to prominent politicians, journalists, and civil servants. The JTTF coordinated with many entities and formed a Joint Operations Center which was comprised of more than 60 federal, state, and municipal law enforcement agencies meant to establish a unified command to effectively coordinate leads and critical activities across their respective jurisdictions. Through an intense investigation that spanned 10 days, the JTTF and FBI New York office’s investigations successfully dismantled 16 explosive devices from being delivered and detonated; preventing serious injuries and ultimately leading to the arrest and prosecution of a suspect.

In December 2017, Federal Bureau of Investigation (FBI) Dallas determined that a 17-year-old suspect was plotting to conduct a mass shooting at a local shopping mall, which entailed the killing of the off-duty police officer that provided security at the mall. The suspect enlisted the help of an FBI undercover employee & source, then surveilled the target location and provided money for the undercover employee to purchase tactical equipment. The FBI Dallas Joint Terrorism Task Force (JTTF) coordinated closely with the FBI Counterterrorism Division and the U.S. Attorney’s Office Eastern District of Texas to investigate. Days before the planned arrest, the U.S. Supreme Court ruled that the definition of a crime of violence was unconstitutionally vague. The federal government was therefore limited to charging the suspect with juvenile delinquency, which carried a maximum penalty of approximately 3 years. Knowing that a 17-year-old is considered an adult in Texas, the team sought assistance from the Collin County District Attorney’s Office, who ultimately charged the suspect with one count of terroristic threat and one count of criminal solicitation of capital murder, facing up to life imprisonment for his crime. The multi-agency effort targeted, investigated, and prosecuted a would-be mass killer, saved countless lives, and resulted in a plea agreement with a sentencing of twenty years imprisonment.

The Minneapolis Police Department collaborated with the Counterterrorism Education Learning Lab (CELL) in developing and implementing a terrorism awareness and training program for Super Bowl LII. In preparation for the event, the Minneapolis Police Department and CELL developed a prevention and preparedness training titled “Community Awareness Program (CAP): Champions for Safety,” which taught individuals how to recognize and report suspicious activity specific to Super Bowl LII. In addition, they produced the training video “Champions for Safety,” narrated by two Boston Marathon bombing survivors. More than 16,000 city employees, private-sector employees, volunteers, vendors, and other personnel were trained and served as a force multiplier for the more than 3,000 public safety officers who worked Super Bowl events. Super Bowl LII and related events took place without any acts of terrorism or significant crimes, thanks to Minneapolis Police Department’s preparation and dedication.

On July 3, 2016, the FBI WFO JTTF arrested Mohamed Bailor (Jalloh) 26, for attempting to provide material support to a designated terrorist organization. Jalloh, a former member of the Virginia Army National Guard, first came to the attention of the WFO JTTF in early April 2016 based on his communication with a known ISIL operative. Subsequent investigation revealed Jalloh intended to conduct a terrorist attack and/or to assist with terrorist attacks against the homeland. WFO coordinated a complex confidential human source (CHS) operation, conducted daily surveillance, and executed numerous criminal search warrants in an effort to ensure the safety of the public and ultimately disrupt Jalloh.

In May 2016, in an effort to disrupt Jalloh before he conducted a terrorist attack, the CHS described to Jalloh the CHS’s plan to conduct a (notional) terrorist attack in the United States on behalf of ISIL and asked for Jalloh’s assistance in procuring weapons for the attack. The CHS indicated the attack was directed by members of ISIL and included murdering military personnel and then conducting a follow-on martyrdom operation similar to the recent attacks in Europe (i.e. Paris and Belgium). Jalloh replied, “…I will support with whatever you need from me.”

In May and June of 2016, FBI Surveillance and CHS operations tracked Jalloh’s attempts to obtain weapons for the CHS’s notional terrorist attack. FBI WFO and FBI Charlotte coordinated extensively to monitor Jalloh’s movements during a trip to North Carolina, where Jalloh spent several hours trying to find a weapon to purchase for the CHS. In late June 2016, Jalloh indicated his family member obtained a weapon but that Jalloh had to find time to go to North Carolina to retrieve it; Jalloh further indicated he wanted to obtain another weapon.

On July 1, 2016, FBI surveillance observed Jalloh at a local gun shop. On July 2, 2016, the WFO JTTF interviewed employees of the gun shop and learned Jalloh attempted to purchase an AR-15 the previous evening. Jalloh did not have the requisite forms of identification but told the employee he (Jalloh) would return the following evening to purchase the weapon. The WFO JTTF coordinated with the gun shop to sell Jalloh an inoperable AR-15.  Later in the evening on July 2, 2016, Jalloh returned to the gun shop and purchased the AR-15.

In the early morning hours of July 3, 2016 Jalloh was arrested. At the time of his arrest, Jalloh had not yet notified the CHS of the purchase, but Jalloh’s Internet history revealed, among other disturbing queries, searches for the July 4th parade in Washington, D.C. On October 27, 2016, Jalloh pleaded guilty to one count in violation of Title 18, USC, Section 2339B, providing material support to a designated terrorist organization. On February 10, 2017, Jalloh was sentenced to 11 years in federal prison and five years of supervised release.

The Jalloh investigation was successful due to support and cooperation among numerous other federal, state, and local law enforcement agencies. Two agencies, the Loudoun County, Virginia, Sheriff’s Department and the Virginia State Police are specifically recognized for their support and assistance.