The IACP Leadership in Looking Beyond the License Plate Award recognizes the dedication and initiative of individual police officers whose daily efforts during traffic stops play a large part in preventing additional, more severe crimes.

The IACP Leadership in Looking Beyond the License Plate Award recognizes the dedication and initiative of individual police officers whose daily efforts during traffic stops play a large part in preventing additional, more severe crimes. This award is designed to substantiate and document the importance of license plates as law enforcement tools and recognize officers who use license plates to prevent and detect both civil traffic violations and further criminal conduct. 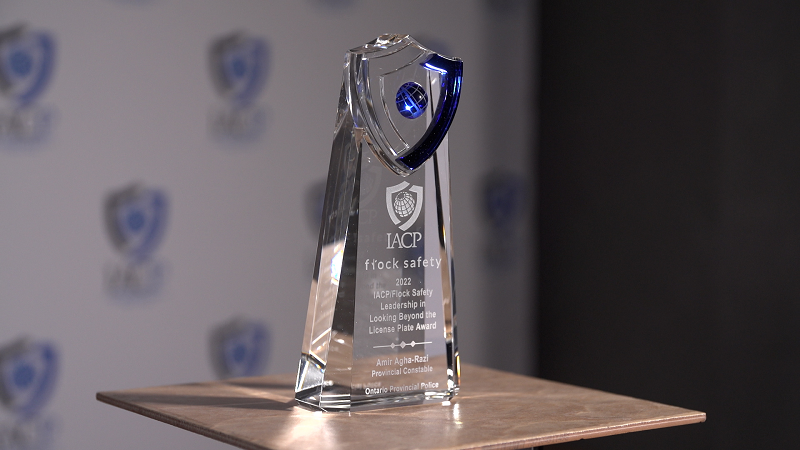 Provincial Constable (PC) Amir Agha-Razi's work in traffic safety has led to interdictions, investigations, and seized drugs and weapons, and rescued victims of human trafficking. PC Agha-Razi's use of license plate quarries, in addition to traffic stops, based on his own observations have led to numerous high profiles stops and arrests. Once such stop occurred in September 2020, where a speeding violation led to the arrest of the vehicle occupants for possession of a weapon, forged documents, and a photo of an unknown individual. The vehicle occupants were also known to be involved in human smuggling. During a separate traffic stop, PC Agha-Razi recognized the individual from the photo and arrested 3 suspects. These arrests led to an investigation resulting in the arrest of a major human smuggler in Brazil. PC Agha-Razi's dedication and initiative to looking beyond the license plate, has yielded significant results, and disrupted major criminal organizations.

Trooper Jonathan R. Davis has pursued a path of valor, service, and leadership. Trooper Davis' traffic stop on a minivan and the legal search of the vehicle ultimately uncovered a credit card theft ring that was operated by two foreign nationals residing in New York. The search of the vehicle yielded the discovery of a large bag containing a credit card skimmer, 14 debit/gift cards, and $140,000 in US currency. Trooper Davis proactively contacted the United States Department of Homeland Security (DHS) to determine if the agency had any intel or interest in these two individuals. An agent was dispatched to respond to the scene. The DHS agent ran all the cards through a mobile scanning device and determined that seven of the cards had been rewritten with stolen credit card identifications. Trooper Davis also contacted the VSP High-Tech Crimes Division for analysis of cell phones and other electronics seized from the vehicle to bolster his case and assist the federal agents with their investigation. Trooper Davis pursued state charges while a grand jury indicted both individuals on more than six felony charges. 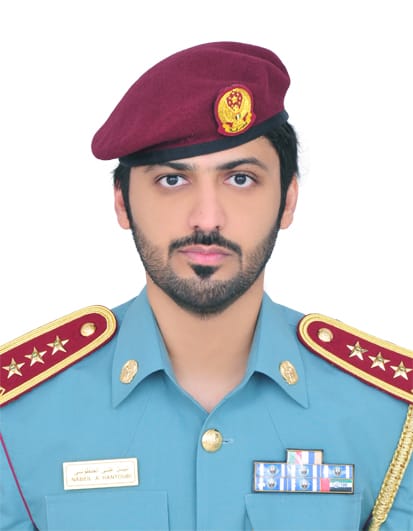 While carrying out his daily duties, Officer Nabeil Alhantoobi, a 15-year veteran of the Fujairah Police General Headquarters, noticed a vehicle carrying a faded license plate. Officer Alhantoobi conducted a traffic stop and asked the motorist for their driver’s license and vehicle license document. Meanwhile, Officer Alhantoobi noticed that the passenger in the back seat tried to open the back door, despite it being locked. When asked about the passenger, the motorist panicked and fled the scene. Immediately, Officer Alhantoobi requested support to search the area in which the motorist fled. From their search, it was revealed that the passenger is 17-year-old who had been kidnapped and violently assaulted. Due to Officer Alhantoobi’s sharp observation skills and quick intuition, the two suspects were apprehended and are now serving life sentences. He his efforts also led to saving the young victim and opening an investigation into the other illicit activities the suspects were involved in.

Officer Caitlyn Crutchfield and Officer Erasmo Garcia proactively ran license plates during their discretionary time and used a license plate hit as the basis to stop a vehicle reported stolen in an armed robbery. They made the initial stop, secured the driver, recognized the need for follow-up, and recovered a weapon. Their continued follow-up led to robbery charges against the suspect and a likely homicide closure shortly after the offense occurred. Officers Crutchfield and Garcia’s actions in this instance looked beyond the license plate and resulted in the closure of violent felonies.

On March 10, 2015, Sergeant Clee stopped a motor vehicle with an expired validation sticker on the plate, travelling in Toronto, Canada. Sergeant Clee ran a check of the driver based off the name provided. Sergeant Clee confirmed that the license plates were not registered to the vehicle but due to a technology malfunction, he was not able to view the driver’s license. Sergeant Clee determined that the driver was driving with a suspended license and issued a summons to appear in court.

While preparing for court, Sergeant Clee performed another search on the driver. This time he was able to pull the driver’s license photo from the name provided during the traffic stop. It was at that point Sergeant Clee realized that the image on the license did not match the driver of the vehicle.

Upon further investigation, Sergeant Clee realized that the driver was committing identity theft and impersonation.

Sergeant Clee was also able to establish that the accused committed fraud against the Ministry of Transportation by fraudulently registering vehicles and obtaining drivers licenses in fake names.

Upon execution of a search warrant at the accused’s residence it was revealed: