The IACP Excellence in Criminal Investigation Award is given to a law enforcement agency, law enforcement unit, task force or inter-agency task force in recognition of exceptional innovation in criminal investigations. Each year, IACP receives entries from agencies around the globe where technology, traditional police work, and in some examples, inter-agency collaboration, meet to solve crimes ranging from unsolved cases and missing persons, to financial crimes and human trafficking. 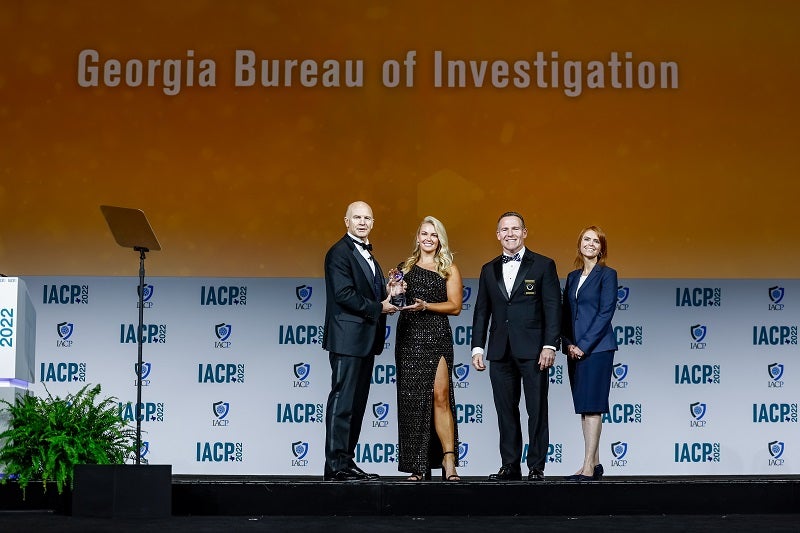 The case began with an out of state Airbnb owner contacting the Gilmar County Sheriff's Office located in the North Georgia Mountains about concerning images from their cabin's surveillance camera. The cabin owner believed he saw a bound and unconscious individual being carried into the cabin. Deputies were dispatched to the scene and discovered the cabin empty but found small traces of blood. The Sheriff requested assistance from the Georgia Bureau of Investigation (GBI). The GBI dispatched crime scene specialists and located the remains of an unidentified victim. The RBI began a multifaceted investigation utilizing human, cyber, and scientific techniques. Realizing the complex nature of the investigation, the case agent and supervisor formed a leadership team to investigate and manage the investigation. The GBI, using innovative strategies, were not only able to solve the murder, but they also identified individuals involved to be part of a transnational drug organization. This led to additional crimes being solved.

The Tallahassee Police Department’s (TPD) Violent Crimes Unit consists of thirteen investigators and four victim advocates. In 2019, these thirteen officers investigated more than 1,500 cases, 24 of which were homicides. TPD’s Violent Crimes Unit is being recognized for their excellence in collaboration, efficiency, and management of criminal investigations, specifically for the apprehension of a double homicide suspect. Within 48 hours, TPD’s Violent Crimes Unit interviewed numerous individuals, exonerated two suspects, obtained a matched DNA profile, analyzed hundreds of hours of cell phone data and security footage, utilized detection dogs, searched vehicles and homes, and more. The dedication and professionalism of the Tallahassee Police Department’s Violent Crimes Unit resulted in the apprehension of a deadly sex offender.

The Georgia Bureau of Investigation conducted a criminal investigation of sexual exploitation from December 2015 through June 2017. Their efforts resulted in the discovery of over 30 victims, as well as the arrest and indictment of the suspect. Though the case required complex digital forensics, the Georgia Bureau of Investigation demonstrated exceptional achievement in successfully seeking and utilizing the expertise of multiple state, local, and federal agencies, including the Federal Bureau of Investigation and the United States Department of Justice. Their strategy to search for additional victims using initial victims’ internet provider addresses, social media accounts, and “machine cookies” of e-mails sent by the suspect was innovative and ultimately resulted in the identification of the suspect. The Bureau’s work in this case provides an excellent example of criminal investigators navigating the labyrinth of digital forensics, persisting in the pursuit of a complex investigation, and leveraging the strengths and capabilities of partner agencies.

For this investigation to be successful, the FDLE special agent had to be cross sworn to work with the Colombian National Police and given a disguised persona that would be posted on the sexual offender registry. This tactic allowed the agent to gain the trust and credibility of additional criminals and sex offenders. FDLE special agents continue to explore the dark web as well as purchase crypto currency in efforts to expose continuously changing criminal networks. Though this tactic is still under development, effects of its establishment would assist in luring suspects who believe they are communicating with other criminals. FDLE special agents are also conducting an initiative once a year in which they reserve high-end hotel rooms along the Florida beach front to recruit prostitutes to get information concerning trafficking networks and the location of any underage girls.

As a result of the investigation, hotels in Colombia are implementing human trafficking training in which the staff is instructed on ways to be more proactive in addressing this issue.