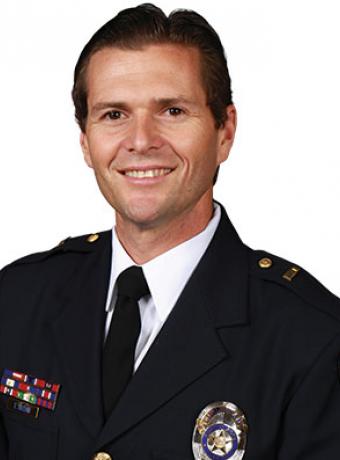 LEUTENANT TOM SLOAN truly represents a “servant’s heart” through his willingness to take on others’ responsibilities without hesitation. From enlisting in the Marines after the events of September 11, to his 12-year career at the Round Rock Police Department, public service is in his DNA. He leverages natural leadership ability with his brand of enthusiasm, creating an exciting and vibrant work culture for the department. He’s been described as bringing out the best in his officers and has been lauded for his outside-of-the-box thinking to create solutions.

One example was the creation of “Tom’s Traffic Tips” social media video series, a public outreach campaign enacted to stem the rising number of crashes in the city. This program won multiple national awards for its engaging method of informing the public on various traffic laws. Another example was with his new assignment as lieutenant in the Criminal Investigations Division when he looked at new ways to cross-train officers and detectives to increase cooperation between units and within the Patrol Division. This helped to create an environment of collaboration and increased efficiency. It also helps prepare officers to obtain other roles in the future.

As the SWAT lieutenant, he was able to increase the efficiency and energy of the SWAT team by appointing a second team leader, which mitigated the load of the team leader previously being constantly on call. Lt. Sloan also raised the skill sets of his Special Investigations Team and Narcotics Unit by introducing new tactical training, which gave them greater versatility in apprehending dangerous criminals; sponsored new departmental procedures; developed relationships with federal agencies; and created a culture of proactivity among his teams.

“I genuinely like to serve and make a difference. After serving my country, I wanted to serve my community.”