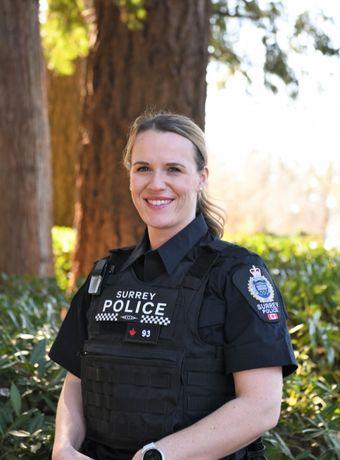 Detective Mandy Glassco started her career with the Vancouver Police Department (VPD) in 2006, nearly 16 years after her mother became an officer with the same agency. She has served in various sections of the VPD within the Operations and Investigations Divisions. Living up to her trailblazer persona, she was hired as the first detective for the newly formed Surrey Police Service to work alongside the Royal Canadian Mounted Police in 2021.

From 2017 to 2021, Detective Glassco was a part of the Combined Forces Special Enforcement Unit of British Columbia (CFSEU-BC), which is the largest integrated police program in Canada. During her tenure at CFSEU-BC, she grew from being simply another member of a team to being an integral part of advancing investigations. When CFSEU-BC was implementing a Quick Reaction Team (QRT) to tackle a prolific gang and drug problem, Detective Glassco was selected to lead the investigative side and to provide analysis and guidance to the team. She was looked to for insight and intelligence regarding files. Her QRT team received a Chief’s Constable Citation for disrupting gang violence and saving numerous lives. Detective Glassco was also awarded the 2020 CFSEU-BC Officer of the Year.

Detective Glassco is deeply entrenched in her community of Surrey as both a community member and a guardian. Not only is she dedicated to making the community a safer place, but she also coaches minor league baseball and manages two youth hockey teams, along with spearheading collections to help families in need.

“I work tirelessly to ensure that when other police officers look at me, they see someone that they want to emulate and learn from.”