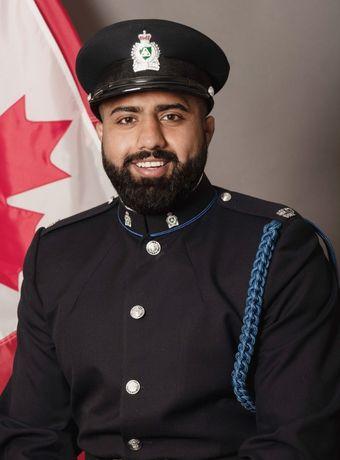 As a young boy, Constable Jessy Sahota began having serious issues within the community and at school, eventually leading to his expulsion from school at age 12. What initially was perceived as a punishment assignment to an at-risk program ended up being a blessing in disguise because it led to his building healthy relationships with positive adult role models within his community. Constable Sahota has made it his mission to pay forward his lessons learned by dedicating his life to cultivating resiliency in at-risk youth to empower them to avoid the perils of drugs, gangs, crimes, and violence.

in his position as a youth liaison officer with the Delta Police Department’s (DPD) Youth Liaison Team (YLT), Constable Sahota works with local at-risk and high-risk youth in the community, many of whom have gang affiliations. His goal is to stabilize the youth by establishing positive connections with police, schools, counselors, and mentors. As part of the YLT, Constable Sahota uses trauma-informed practices as the guiding principle and, alongside his team, assesses each case individually for further follow-up, engagement, and action; the criminal justice system is to be used as a last resort.

Constable Sahota is a well-known, world champion kabaddi player and wrestler who recently attended and won three gold medals at the World Police and Fire Games. A three-time Canadian National Champion in Wrestling. Constable Sahota recently started a DPD Wrestling Club in conjunction with a local high school, which has been much more successful than ever imagined. The club is built on the strong values of diversity, equity, and inclusion, with the first and most important principle being one of respect: respect for each other, but most importantly, respect for themselves. Through the DPD Wrestling Club, Constable Sahota is developing positive police and youth relationships, thus increasing public safety and reducing crime, victimization, and recidivism.

“I saw my community struggling with at-risk youth and gang problems, and I knew that I needed to be a part of the solution.”