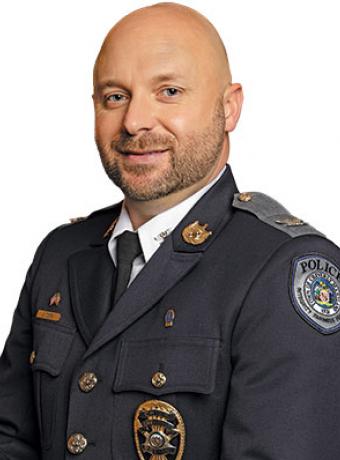 When the town of Cheverly needed a law enforcement leader to build a culture of trust and accountability with the community, CHIEF JAROD J. TOWERS, then a sergeant with the department, answered the call. He took command of the department in a time of compounded disarray and uncertainty in town leadership and repositioned it under a community-oriented policing model.

As chief, he is a transformational leader, instituting a complete rebranding of the department with the creation of a new mission and vision, and holistically embracing department values in support of 21st century policing. He translated this philosophy into progressive policies and cultivated a department culture that respects the inherent dignity of every person.

Chief Towers thoughtfully and openly engages community members and seeks out ways the department can rethink and revise policies and operations to increase trust and safety. Understanding how technology can advance transparency and accountability, his was one of the first agencies in the Washington, DC, region to implement a full department body-worn camera program, which later evolved to a comprehensive program complete with in-car and body-worn camera interconnectivity.

He has established an implicit bias training program, trained his officers on African American history and culture, and taken steps to ensure the values of marginalized communities, to include LGBTQ+, are included in all principles of the department. Additionally, he’s established a youth kickball league and was able to make department staffing changes that have significantly increased morale.