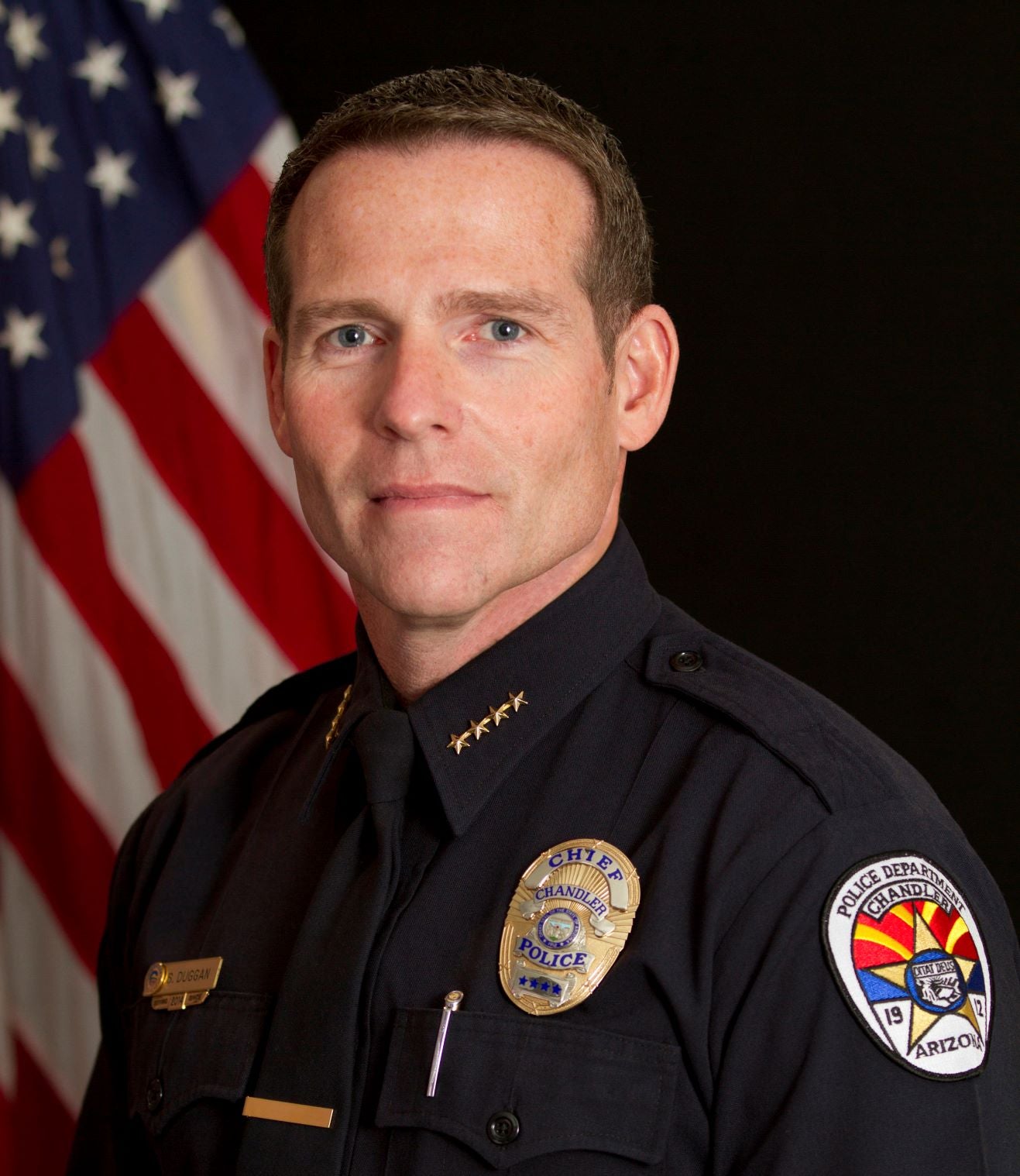 Chief Sean Duggan was appointed as the Chief of Police for the City of Chandler on January 13, 2014 after serving 27 years with the Scottsdale Police Department. He brought with him a wealth of knowledge and experience, having worked assignments in patrol, investigations, SWAT, and other specialties at levels from officer to Assistant Chief.

Throughout his career, Chief Duggan has advanced the tenets of community policing, developing a deep-rooted history of community engagement and participation. He has promoted a culture of exceptional customer service, treating each citizen contact as a moment of truth, an opportunity to earn their confidence and support. As an engaged East Valley police executive and an established member of various local, state, and national law enforcement organizations, he has been an active member of the regional public safety community.

Chief Duggan was selected to participate in the FBI’s Police Executive Fellowship Program in 2010 and was assigned to the National Joint Terrorism Task Force at the National Counterterrorism Center in Washington, D.C. He served on the International Association of Chiefs of Police (IACP) State, Local, and Tribal Based Domestic Security Advisory Committee, 2010-2011 and the Committee on Homeland Security, 2012-2016. He presently is a member of the IACP Board of Directors and the IACP Policy Center Advisory Group. Chief Duggan is a member of the Arizona Association of Chiefs of Police, and past chairperson of the East Valley Chiefs of Police Association. In June 2015, Governor Doug Ducey appointed Chief Duggan to the Arizona Criminal Justice Commission (ACJC) where he served as chairperson until 2019. In 2020, Chief Duggan was appointed to the President’s Commission on Law Enforcement and the Administration of Justice assigned to the Data and Reporting working group.

Under Chief Duggan’s leadership, the Chandler Police Department has made great strides towards becoming a world-class leader in 21st century policing by engaging the best trained, equipped, and committed professionals and by employing the best practices in policing. Chandler remains one of the nation’s safest cities with populations over 250,000 residents.

My name is Sean Duggan, and I am excited to announce my candidacy for the International Association of Chiefs of Police (IACP) Vice President at Large. I respectfully ask for your support and your vote for this trusted position in the 2021 election in New Orleans.

I began my law enforcement career in 1986 with the Scottsdale, Arizona police department where I served for 27 years before becoming police chief in Chandler, Arizona in 2014. I have been an active member of IACP for the past 15 years serving on the Domestic Security Advisory Committee, Homeland Security Committee, and the Policy Center Advisory Group. I currently serve on the IACP Board of Directors.

Throughout my career, I have dutifully served my community and the men and women working alongside me. I gained experiences and skills necessary to help lead our profession during these challenging times and will work collaboratively to create a clear and constructive path forward. I will work diligently to advance the goals of the IACP membership and the agencies you represent. I humbly ask for your support and your vote.