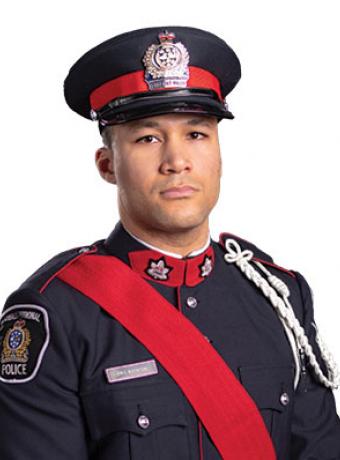 STAFF SERGEANT ERIC BOYNTON has been described by his superiors as the epitome of an exceptional officer and human being. He joined the Waterloo Regional Police Service in 2012 and has served in a variety of areas, such as patrol, CORE, criminal intelligence, and recruiting. Promoted to sergeant in 2019, he became a supervisor in the Training and Education Unit and was subsequently selected to lead the services’ relatively new Equity, Diversity & Inclusion Unit (EDI), where he was then promoted to the rank of staff sergeant in 2021.

S/Sgt. Boynton took on the difficult task of implementing the new EDI Strategic Plan. In a short period of time, he helped grow the unit into a high-functioning team that has created programs and trainings to raise officers’ awareness of equity, diversity, and inclusion, while trying to change organizational culture.

A consummate professional, S/Sgt. Boynton is the recipient of several awards including a Chief’s Commendation; the Chief’s Pride Award from the Hamilton Police Service; and academic awards, including the Dr. Paz Buttedahl Graduate Award in Peace and Justice and the Rotary Peace Leadership award. He is in the process of completing a doctoral dissertation focused on diversity in Ontario Police Services, guest lectures at the University of Waterloo, and enjoys volunteering with the Special Olympics. S/Sgt. Boynton also honorably served in the Canadian Armed Forces Reserves for nearly a decade. Emphatically committed to personal physical fitness, he most recently represented Canada and won two silver medals and one bronze medal at the World Police & Fire Games in Chengdu, China.

,“Deeds speak. We can make a consistent difference with consistent actions that build trust and demonstrate professional excellence in the community. “